Can You Wear a Corset with an Ileostomy???

Birthdays are always hard for me. It's the time of year where everything I haven't accomplished career-wise really hits home. I try to go into the day with no expectations so I don't become disappointed, but a little part of you that expects just a tiny bit of specialness is always heartbroken when nothing good comes your way.

We just got done with our SECOND move, and Mr B is extremely busy with grad school, and we don't have any money to spend, (we barely have any at all) so I understood why I would be receiving no presents this year.
Since I can't eat cake, or hardly any food at all (not typical of ileostomates, just me as I have slow transit and possible borderline Gastro Parisis), there was no cake or candle blowing. Our tiny rented rooms are empty but for lawn-chairs we borrowed from the landlady and our big suitcases. No streamers or balloons--kid things, but they can brighten up a place.

After some really uncomfortable and unsuccessful sex, I spent the rest of the night crying in the rain, waiting for buses that showed up late, walking in the really fucking cold wind to get to an overcrowded bar that didn't have room to seat me. (And at that point, I wasn't going to spend an hour traveling to the heart of the city to nightclubs.) I think I'm also so sad because when we moved, we had to leave our cats behind, with the promise from my mother that she'd make sure we'd get them back. Well, she's grown attached to them, and only wants to relinquish one now, and hasn't spoken to me since. I kept checking me inbox every day, thinking she would at least write me for my birthday, but alas...
We just feel so lost and alone and without money and directionless in this country.

Earlier that day, I went in for my second appointment to get my corset fitted. Lace Embrace is a fabulous place here in Vancouver BC where they will fit you properly and make adjustments for your own body type and desires. Because I have scoliosis, I had to wear a TLSO back-brace for about 15 years or something, at least more than ten, and I became used to the feeling of having that nice rigidness around me. However, corsets are breathable, plastic braces are not!
Lace Embrace has shops now all over the country of USA, and is run by this surprisingly young-looking Melanie. (Seriously, she looks like she's 22, and not in a surgically enhanced way at all, but in an enviably good-genetics way.)
On my first visit, her assistant fitted me and began filling out the form for the kind of corset I wanted. On my second visit, Melanie fitted me herself with Dita Von Teese's prototype stage corset. (Yeah, did  I mention Dita flies to Vancouver JUST to see Melanie and get fitted for custom corsets by her??) 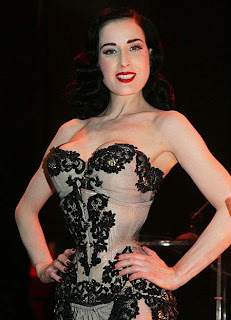 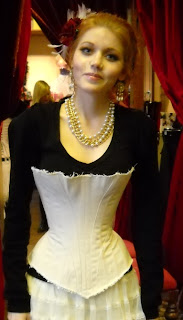 Amazing. Anyway, mine is I think called the femenette, and right here on me is Dita's prototype... an overbust--I'm getting an underbust, and it's too big for me, as she is bigger than me anyway. ﻿(My shoulders look all wonky because I have on this sweater-shrug thing that goes over my T-shirt... I don't know what it's called, but it always slips off my shoulders and makes them look like footballer shoulders.) 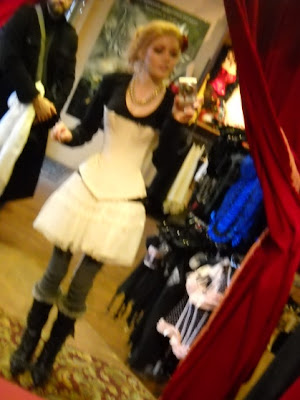 Yes, that's Mr B waiting patiently in the background.
With Melanie, I discussed how I have an ileostomy and how I'll need access to the bag. She took down my measurements and said no problem, she can make the corset shorter, or have a little flap that opens and buttons up again, just like the Victorian nursing-corsets, with flaps to open for boobage to come out.
I have this problem with ligaments in my body, and those holding up my organs are wear and so my liver etc has all fallen very low. With a corset, it lifts them back up where they should be. And no, it's not bad for your digestion, and no, I'm not a tight-lacer. I don't want to have to defend my reasons for liking corsets. Some feminists will say it's cages of men's tyranny or whatever bla bla. Others will say Why--you're skinny enough. It's not about being skinny, it's about being an hourglass, and I love old fashions anyway, so STFU.

I'm getting mine made in ﻿this pale pinkish sort of cotton twill--I think it's called??--that has this sort of jaquard-ish floral design. It's going to be edged in cream lace, and though we still have to knock out a few details about stitching, for the most part, I think that's it. In 4-6 weeks I return to Lace Embrace for a specific fitting of my actual corset--and I will keep you posted!!
Posted by Tinylittlelifeform at 1:14 PM

Tinylittlelifeform
I'm a professional writer of mixed descent. I'm hella into manga like Berserk, more adult and not so chibi anime, and FASHION of all kinds. Oh yeah, I also have an ileostomy. Meh. I'm not a Doctor, & if you got a real problem--get thee to one